ABOUT WORLEY THE WIZARD 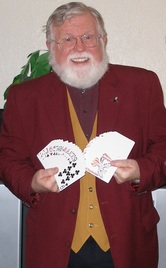 The Wizard at a Wonder Show
Lloyd Worley is a retired University Professor and award-winning magician who has been performing magic and magic shows for over 50 years! Worley the Wizard is known nationally and internationally in the world of magic. He  is Founding President Emeritus of the Greeley (Colorado) Assembly #292 of the Society of American Magicians. Worley the Wizard is also the Colorado Deputy for the Society of American Magicians. He recently celebrated his 51st wedding anniversary with His Lovely Assistant and show sound technician, Maydean.

Worley the Wizard will delight and amaze your clients, your customers, your adult or children’s party with family-friendly magical fun and surprise! Working astonishments for children and wonders for adults, he will even invite audience members to perform magic as well! No one will be embarrassed, but everyone will be surprised and happy. And, after the show,  Worley the Wizard can perform marvels and mysteries right before you in astonishing close-up magic!